This project aims at implementing a complete system for creating realistic 3D maps from visual odometry and raw images.

This project is included within the computer vision field and, in particular, within the visual SLAM research field. Visual SLAM algorithms are focused on creating and updating a map of an unknown environment and simultaneously calculating the location of a robot/camera within this map. They often employ cameras (RGB or Depth cameras) as input and usually run in real time. These algorithms have many real applications, like real-time augmented reality, robot navigation or, like in this project, 3D map reconstruction and visualization.

Visual odometry (VO), however, focuses on calculating camera poses (movement) only. Compared to SLAM, They are more light-weighted, some of them can even run on mobile phones. However, they sometimes completely ignore map building and often produce less accurate trajectory and sparse pointcloud.

This project is built upon existing Visual Odometry algorithms (including sparse SLAM algorithms). Unlike most visual SLAM algorithms, which only takes RGB (or RGB-D) images as input, it takes the trajectory and pointcloud produced by VO algorithms as well as raw images. The goal of these project is to create maps from sparse pointcloud (with RGB images) in simple environments.

It has many potential applications, as it extends VO algorithm the capability to build maps with a relatively low cost. One of its possible and classical application could be to estimate the table plane for AR games.

To implement a system that could reconstruct the surface from sparse online SLAM pointcloud, the major problem is that the pointcloud is sparse and often of low quality. To be specific:

To solve the above problems, this project contains 3 important parts:

The overall architecture of this project: 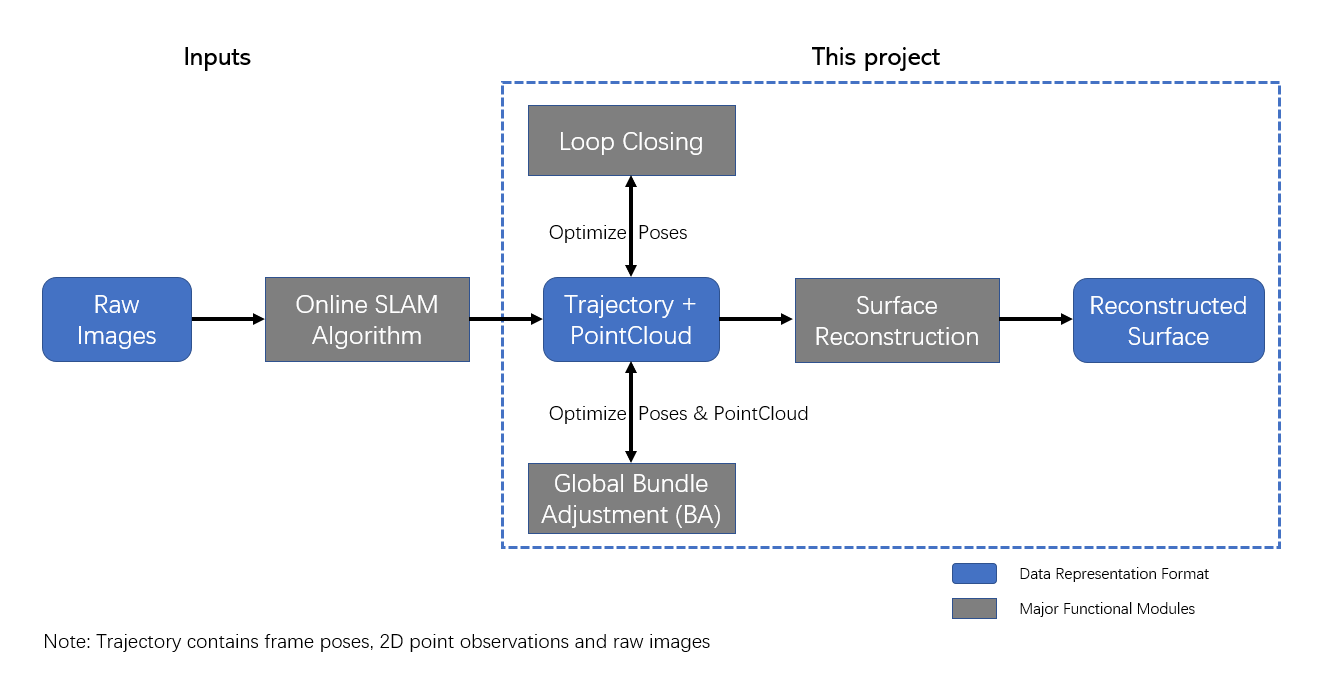 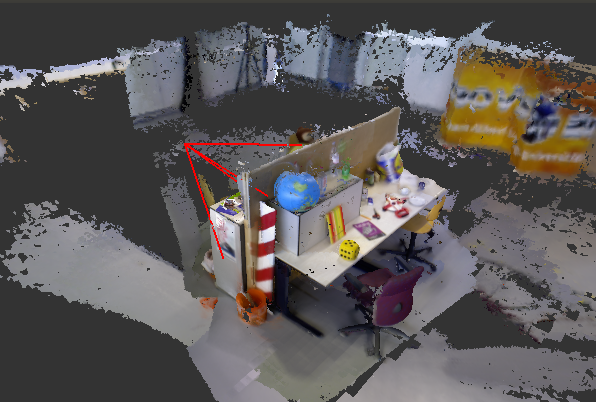 This would require future works because this is still an active research area and that is no mature solution for producing this ideal map.

In general, the project has 3 parts

Currently Progress Overview: All the coding are finished and tested. Refer to the project repo (on the top of this page) for the code.

It has been completed and is working now. In the following demo, I use TUM Monocular Visual Odometry Dataset Sequence 43 as raw input, SD_SLAM (a derivated work from ORB2_SLAM) as the sparse SLAM algorithm to get the input trajectory. (Note: the images has been pre-processed to get undistorted images)

The original trajectory is shown following. There is an obvious gap between the start and end of the trajectory.

The optimized trajectory is shown following. The loop closing is working as the gap has been closed.

For bundle adjustment, it would be hard to visualize the difference between optimized and non-optimized. So optimization report is provided as demo: The test setting are exactly same as loop-closing. (note: the loop closure is not enabled in producing input data with sd-slam). It tooks about 45 seconds on i7-6700 with 8G memory.

In the following demo, 5 surface is reconstructed with TUM RGB-D benchmark dataset freiburg3_structure_texture_far and slam-sd-slam.

The surfaces are not consistent and contain many holes in the above video. This is because there are not enough point observations in the input data. This is similar to the problem of the textureless plane in SLAM, and there is no mature solution for that.

One possible solution is to use some prior knowledge to aid the surface reconstruction, which I would be willing to try after GSOC. (for project scope consideration, this is not part of GSOC 2018)

I have spent quite a long time implementing that (almost continued about 2-3 weeks, excluding loop detection). Here is a short summary of the problems I met and the final implementation.

The current approach I implemented here is that:

The Global Bundle Adjustment still uses ceres-solver as the optimization backend. Some part of the code is adapted from ceres-solver BA example, but there are modified. It only optimizes the camera extrinsic and point poses. Camera Intrinsic are taken from the input. It's using the pinhole camera model with fx, fy, cx, cy.

Surface Reconstruction The major problem for surface reconstruction is there are too many outliers and too few observations. To remove the outliners, we assume the surface needed to be reconstructed are plane, which is true for most indoor environment. So RANSAC with plane estimation is used for outlier removal.

Too few observations cause 2 major problems, as shown in the demo video. First, some surface is inconsistent, because some area simply contains nothing. Secondly, because some plane didn't get all three 2D vertexes observations in a single image, they are discarded to avoid false positive. These two problems are hard to solve, I may seek for solutions in the future.

YAML Trajectory file format A customized YAML file format for storing trajectory is widely used in this project and other JdeRobot SLAM Project (including slam-sd, slam-DSO). I have spent some time saving the trajectory in that format both for slam-DSO and this project.

Maybe we should come up with a library for YAML trajectory file format, such that other related projects don't have to copy, paste and modify this part of code.

We are interested in using deep learning, especially object detection and plane estimation, to aid the surface reconstruction. Thus, after GSOC 2018 (August 22st, 2018), we would like to do some further work.

There are several directions: 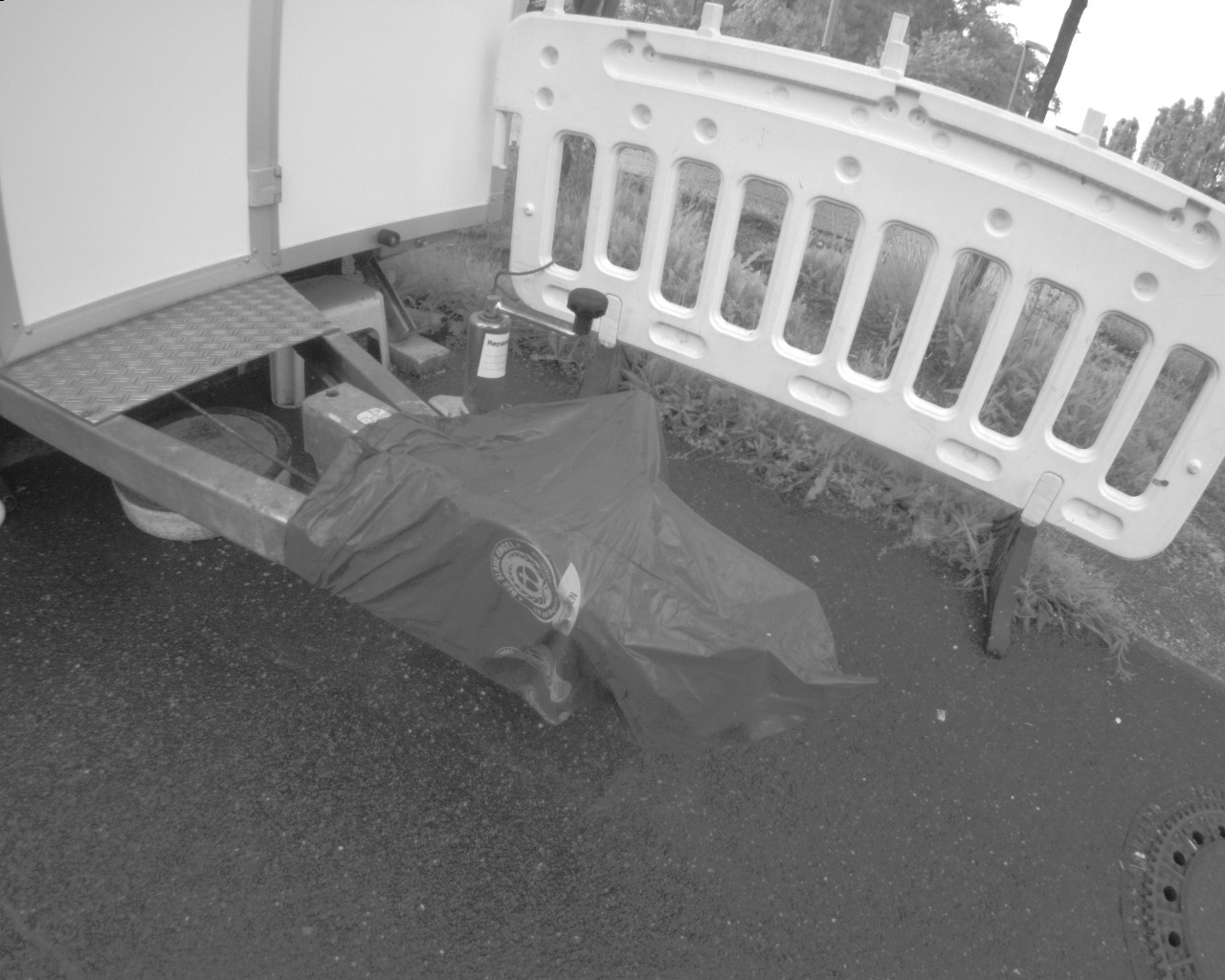 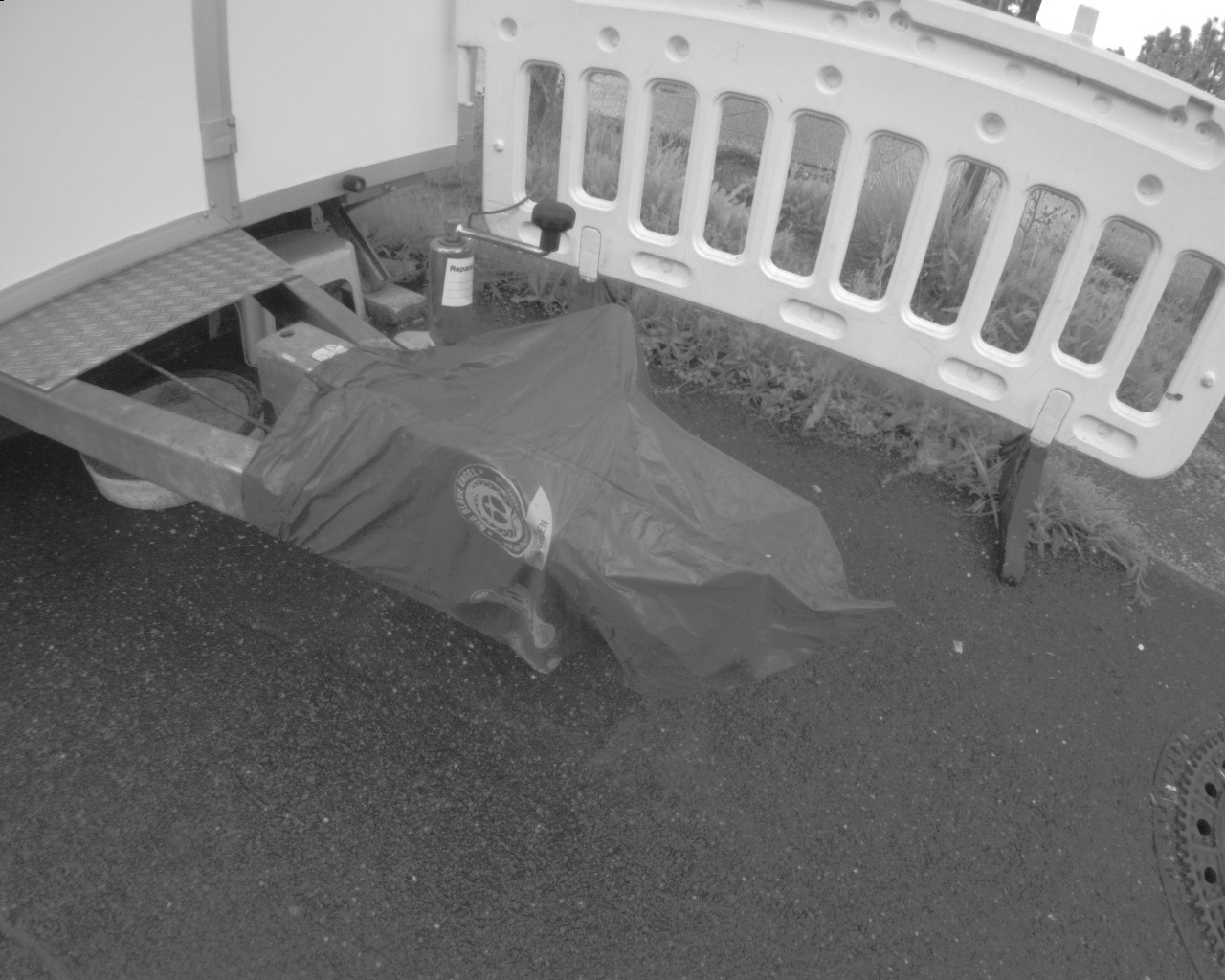 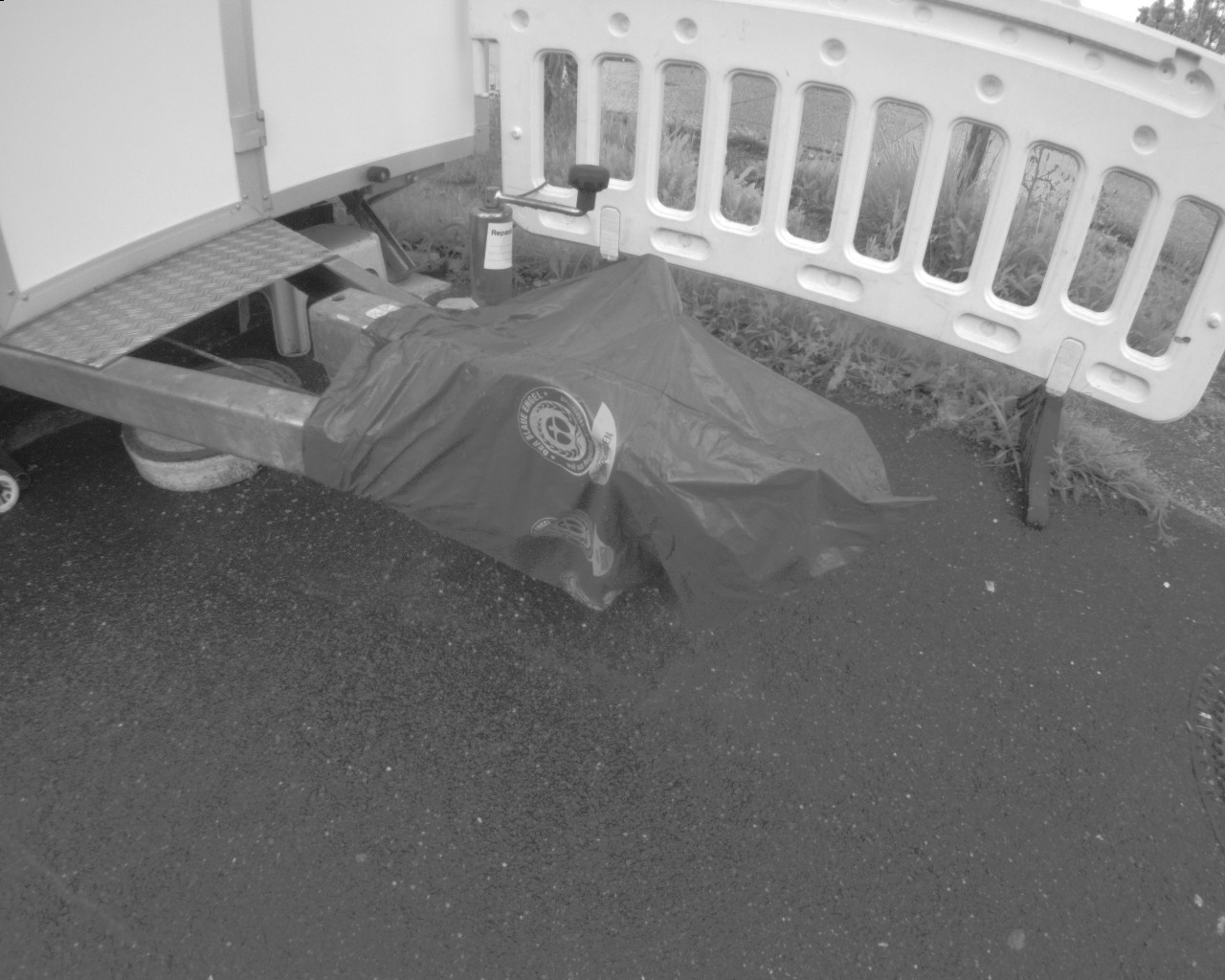 Working Demos (Surface Reconstruction using DSO PointCloud) Here are two surface reconstruction demos with , but a more completed demo with parameter compasion has been uploaded to the Section Current Progress.

Tested and not working demos

This Poisson Reconstruction with DSO is not working because this method aims at reconstructing a watertight object. This is under the assumption that the object to be reconstructed is watertight. I tried this method because we think the whole 3D map can be viewed as a huge object. However, The above demo shows that the map can't fit in the assumption, in our application scenario.

PointCloud from ORB2_SLAM doesn't have good performance on surface reconstruction, because the ORB2_SLAM lose too many information (including lines). Even human can hardly recognize anything from the pointcloud produced by ORB2_SLAM.

Development Log (Documentation and demos) For GSOC's second evaluation, I spent some time writing the documentation for the code, and update current progress with some more demos for this wiki. :)

Several loops closing pair are detected (using undistorted images, other experiement setup remains the same as that in phase 1):

DSO Pointcloud and Observation has been saved to file (in YAML format, which can be read by slam-viewer directly)

The video can be accessed through here